When your child is fighting cancer, one of the coping mechanisms you have to possess is the ability to take each day as it comes.  It is far too overwhelming to look ahead, because the future is just so uncertain and scary.  Instead, you learn to treasure each day and all of the little beautiful moments that present themselves.  When your child is fighting stage 4 cancer, it’s not about looking forward to graduating from high school; instead, you celebrate just feeling well enough to make it to school on that particular day.  It’s no longer looking forward to the next birthday; it’s about being thankful that she is not in treatment today.  It’s not about wondering what career she will have in the future, it’s about being thankful that we don’t have to worry about the results of another set of scans for another six weeks.  Over the past four years, our family has followed Megan’s lead and become much better about living in the moment and seeing each day as the blessing that it is.  However, now that Megan has defied all of the odds and is still fighting four long years later, some life decisions are all of the sudden upon her.  As she tends to set the example for us, we are once again trying not to worry and following her lead as she takes things slow and easy.

My wife and I are both educators, so we are strong believers in the value of an education.  When Megan was first diagnosed, there were so many thoughts that rushed through our minds.  First and foremost, we were focused on Megan’s treatment, but when she responded so quickly to treatment, I started to worry about her education.  As is customary, Megan straightened me out quickly by letting me know that her sole focus was on beating cancer and everything else was going to have to take a backseat until she won her battle.  As a result, we really were unconcerned about school for the first three years of her treatment.  Coal City Middle School and Coal City High School were both awesome about working with her, and they did their best to help her stay on track, but eventually the treatments and the resulting absences became too much to overcome.  Although she picked up a credit here and there, she was remained very far behind her peers.  As her senior year came, she all of the sudden started thinking about graduating with her class, but taking the traditional route of classes at CCHS was just not going to allow her to reach her goal.  Luckily, she got hooked up with a special program out of Joliet junior College that allowed her to take her classes at her own pace in the evening.  In typical Megan fashion, she got after it and last week celebrated the completion of her last class far ahead of schedule.  Now she has completed all of her requirements for graduation and will be graduating with her class come this may.  After her final class, we celebrating with a well-deserved strawberry milkshake from Steak-n-Shake 🙂

Now that Megan has completed her classes, she has the rest of the semester to recover both physically and mentally as she starts to think about the rest of her life.  After the completion of her proton radiation treatments, she still has to get scanned in mid-March, so it is difficult to start anything too intense until she gets the results of these scans.  Megan’s body and mind have been so abused over the past four years that she also wants to focus on her physical and mental health.  As she explained in her recent Facebook post,

Now that I have finished high school I am taking things slow and easy. I am not taking any college classes right now as I am trying to focus on myself and my health both mentally and physically.

She is still working at the dance studio two nights a week, and she is also actively seeking out babysitting jobs.  Since she is available during the day, she is hoping that there are people who could use her services once or twice a week.  Megan loves little kids; especially babies, so if you know anyone who might need some help, be sure to comment on this post and Megan will get in touch with you.  I sincerely hope that cancer can give her a break long enough to let her enjoy this reprieve from the stress of treatment, school, and preparing for the rest of her life.  I’m pretty sure she deserves it.

Although we all really enjoyed having Kenzi home from college for the holidays, I think Megan was the happiest to have her home.  They hung out together most every day, which meant Megan was never really alone in the house.  They went shopping, out for coffee, watched movies, cooked together, and just generally enjoyed each other’s company.  However, Kenzi’s winter break couldn’t last forever so last Monday it was time for her to head back to Madison, WI.  Although she doesn’t start class until January 22, she needed to get back early for her new job and to take care of some things at school.  We are so proud of Kenzi and everything she is accomplishing at the University of Wisconsin, but we sure do miss having her at home with us.  The first thing Megan said after Kenzi left was, “Well, what am I supposed to do tomorrow morning?”  As always, Megan is adjusting quickly and they still Facetime each other everyday.  Here are a few pictures I took just before Kenzi headed out the door. 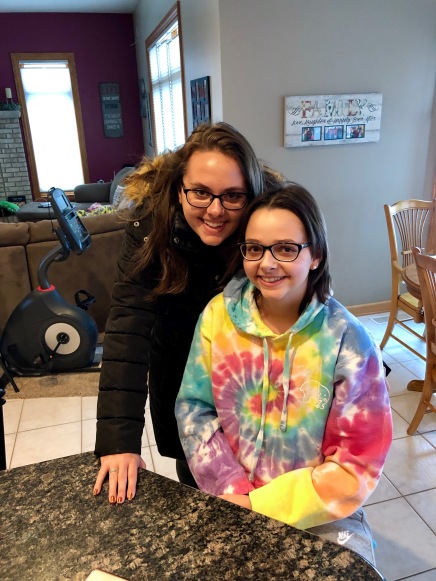 Last September, we took Megan to Curefest, which was a weekend in Washington, D.C. dedicated to raising awareness for the drastic need for increased funding for childhood cancer research.  Due to this lack of funding, our country has made zero progress in the last 50 years in the survival rates for Stage 4 Alveolar Rhabdomyosarcoma!!!  I have no idea how that is acceptable in a country as wealthy and advanced as ours.  While at Curefest, Megan met some amazing people and established some lasting friendships.  One such friendship was with an incredible young cancer survivor named Ava.  Ava and her sister Emma are both accomplished dancers who both performed on the Curefest stage.  Since Curefest, Megan, Ava and Emma have kept in touch and this weekend Megan stayed with them in Chicago as they competed in a dance competition.  Megan had a great time as she really enjoys hanging out with Ava and Emma, and she also loves dance.  here is a picture from her weekend in Chicago.

As she awaits her next scans, Megan is continuing to work on her physical and mental health.  Cancer has been beating her down mercilessly for four years, so it is going to take time for her to recover.  Right now, ten minutes on the stationary bike seems like an eternity to her, but she is still doing it every day.  There are still those moments when the gravity of her situation takes a toll on her mentally.  However, with her hard work and determination, I’m sure her physical and mental health will improve by the day.  Like Megan said, the key is to be patient and take things slow and easy.  Cancer is a beast, but Megan is more determined than ever.  Cancer doesn’t stand a chance!!!

31 thoughts on “Taking it Slow and Easy”