After Megan completed her initial 54 week treatment for stage 4 Alveolar Rhabdomyosarcoma (ARMS), she became very interested in childhood cancer research statistics.  What she found was both sobering and troubling to her as she discovered that the Federal government was doing next to nothing to fund childhood cancer research.  She also learned that the major pharmaceutical companies ignored childhood cancer because they did not see these kids as a profitable venture.  She learned that she was being treated with many of the same chemotherapy drugs that her parents would have been treated with when we were kids.  She learned that over the past 50 years, there has been NO CHANGE in the survival rates for kids with stage 4 ARMS!!!  She then started talking to the many other childhood cancer warrior friends she made via social media, which is when she learned that kids with Ewings Sarcoma, Osteosarcoma, DIPG, etc. were all facing the same uphill battle she was.  Due to a lack of Federal and private funding, these incredibly brave kids were being treated with outdated treatments, and without a change in emphasis and funding, they had little hope for the future.  That’s when Megan decided that she had a choice.  She could either sit on the sidelines feeling sorry for herself and complain, or she could actually do something about it.  I will forever be proud of her for choosing the latter.

Megan starting talking to her oncologists about promising research projects.  She also reached out to her friends and anyone else who would listen.  After considering her options, she settled on supporting the research Dr. Walterhouse was conducting at Luries Children’s Hospital in Chicago.  When she first went to meet with Dr. Walterhouse, he enthusiastically explained in detail the research he was conducting.  He was specifically studying why ARMS and Ewings Sarcoma cells became immune to certain chemotherapy drugs.  If he was successful, it would be a game-changer in fighting childhood cancer.  Currently, due to such limited treatment options, once an ARMS patient relapses, they are treated with a different set of chemotherapy drugs because the cancer cells are now immune to the first set of chemotherapy drugs.  That’s why relapses can be so devastating for these kids.  Megan has relapsed three times, which means that her research-based chemotherapy options are gone.  Fortunately, her relapse tumors have been caught early and were small enough to be treated with proton radiation.  Unfortunately, other kids with her disease are not so lucky.  If Dr. Walterhouse was successful in his research efforts, it would have been a huge advancement in treating Megan’s type of cancer.  As a result, Megan decided she was all in.  She was ready to financially support the research that could not only save her life, but the lives of so many other brave childhood cancer fighters.

In the past year and a half of supporting Dr. Walterhouse’s research, Megan has raised over $165,000.  There are so many generous individuals and organizations who have helped her get to this point in her fundraising, but it is Megan’s passion that has always been the driving force.  However, on Thursday, Megan got some sobering news.

Dr. Walterhouse set up a call with Megan and I on Thursday.  Much to Megan’s dismay, he shared that he was going to have to close down his lab.  Dr. Walterhouse is a brilliant man who is one of the leading oncologists in the country in treating childhood sarcoma patients.  Over the past few years, he not only was conducting his research, but he was also seeing a full load of patients who were counting on him.  Here’s the key…He told us that funding for research projects such as his were so limited, and he just could no longer dedicate the time necessary to try and keep securing funding for his research.  Spending time trying to secure funding was taking away from the time he needed to spend treating his patients.  It is important to note that all of the support everyone has provided to Megan’s fundraising project has not been for naught.  The National Institute of Health has shown an interest in the cells Dr. Walterhouse’s research has produced, which is a huge step in the right direction.  Also, Dr. Walterhouse is going to complete what he can in his lab over the next two months and write up his results.  This will allow others in the medical research field to hopefully pick up on his research and bring it to fruition.  However, it is still very frustrating to see yet another promising childhood cancer research project has been cut short due to a lack of available funding.

I was with Megan when she took the phone call from Dr. Walterhouse, and at the time, I was oblivious to the impact it had on her.  She was doing her best to hide it, but when I got home from work I could tell she was still really upset.  After some prodding, she said that she was upset because she really believed Dr. Walterhouse was going to find the cure for her cancer.  She had such high hopes that a cure was on the horizon, and now she felt defeated.  She said she wasn’t angry with Dr. Walterhouse because she knows it wasn’t his fault, and she also knows that there is a good chance someone will pick up on the great work he has already done.  Although Megan was understandably upset, she never stays down long as she is already actively searching for another promising research project to support that is studying a cure for ARMS.

Megan asked me to sincerely thank everyone who has supported her fundraising efforts, but she will now have to close her fundraising efforts until she determines a new and promising research project that needs financial support.  Megan knows the cure is out there…we just have to create the national urgency to find it.  She and her friends are working on that.

On an exciting note, Megan was recently honored for her advocacy and fundraising efforts for childhood cancer.  Her high school principal, Mr. Hamann, nominated Megan for an American Red Cross Hero award.  Annually, the Red Cross provides Hero Awards to people across the Chicago-land area in 11 different categories.  Megan was so excited to learn that she was chosen as the Hero Award winner for the youth category!  She will be honored at a breakfast in Chicago on May 1 that will have about a thousand people in attendance.  The American Red Cross had Megan come to their home office in Chicago to shoot a video that will also be aired at this event.  On Thursday night, the Red Cross held a reception for all 11 Hero Award recipients and their families.  It was a wonderful event, and Megan was quite humbled to be in the presence of so many incredibly giving and generous people.  She was also excited to learn that another of the 11 Hero Award winners was from the area as well.  Detective Paul Clampitt with the Grundy County Sheriff’s Department was also recognized for the heroic actions he took to save a person’s life in Morris, IL.  Here is a picture of the two of them at the reception.  Also, I included a picture of Megan next to her Hero Award picture.  The May 1 Hero Awards Breakfast will definitely be an exciting event, and it will be yet another opportunity for Megan to spread her message of childhood cancer awareness.  Many thanks to Mr. Hamann for nominating Megan for this award. 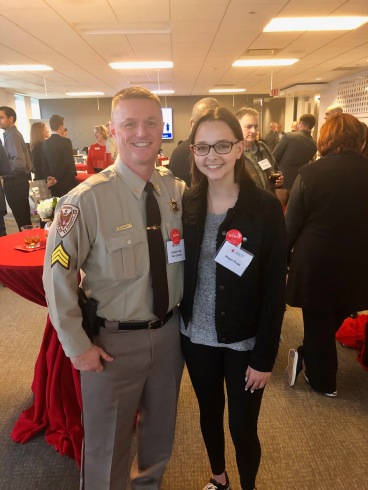 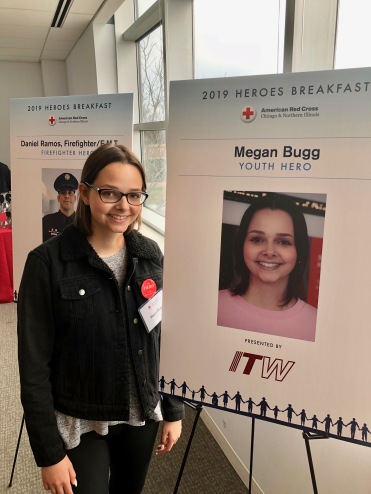 Megan was excited that the weather was nice enough earlier this week that she could get out and watch her good friend and next door neighbor, Madison Emerson, play softball.  It was even more exciting when Madison hit two home runs in a big Coaler 3-2 victory!  The team even had a childhood cancer awareness poster on their dugout, which was very touching.  After the game, the team showed their continued support by getting a team picture with Megan.  Of course, Megan also got her picture with Madison.  Thanks to the CCHS softball team for supporting Megan and all kids with childhood cancer!!! 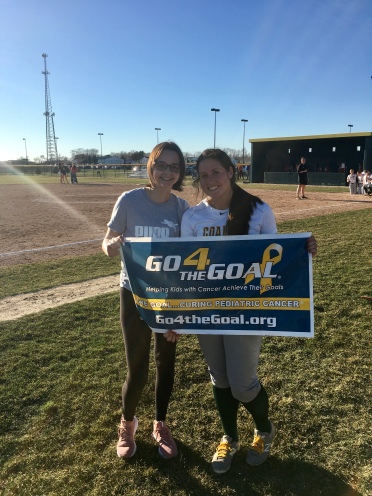 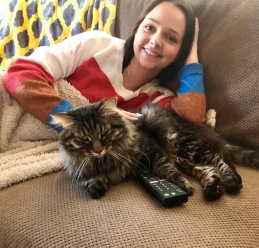