As I reported in last week’s post, Megan was a little concerned because she had felt a bump on her neck.  After the past four and a half years of fighting Stage 4 Alveolar Rhabdomyosarcoma, Megan knows her body better than anyone, so if she was concerned, so were we.  We have learned to follow Megan’s lead, so we were all thinking positive in hopes that there was some other explanation other than a return of her cancer.  We met with Dr. Hayani on Tuesday and after a physical exam, he confirmed that Megan was correct that something abnormal was there.  He ordered an immediate CT scan, but Megan was still thinking positive.  She was showing no other signs of infection as her energy level was pretty good and she had no fever, but of course we were very worried.  Late Tuesday afternoon, Dr. Hayani called me with the news that there were actually two tumors in Megans neck.  The first was the one she felt, which is on the front left side of her neck and is about two inches in diameter.  The second was a complete surprise to us as it showed up in the back of her neck at the base of her skull and is about one inch in diameter.  I then had the job of informing Megan, Kenzi and Deb of the news, which is always so difficult.  I have said it before, but awaiting the phone call from the doctor after Megan’s scans is agonizing, and when I see the caller ID finally show up on my cell phone, I have to let it ring about three times before I get the courage to answer.  News like we received on Tuesday is the reason why it’s so hard, and I would never wish it on any parent…ever!

I called Deb to let her know and then we came home to talk with Megan and Kenzi.  When I told Megan the news, she took it in typical Megan fashion.  She got a surprised look on her face that quickly turned to determination.  She only had two questions:  “What are the options for treatment?”, and “When will treatment start?”  She didn’t cry; she didn’t get mad; she didn’t even change her expression.  I know that deep down she is scared and upset, but at that moment, I am once again convinced she was taking care of all of the rest of us.  I know she didn’t want to upset her sister or Deb and I, so she made sure and kept it together.  There have been so many times throughout her four and half year ordeal that I have wondered who is really taking care of who.  She is so strong!

All of the medical professionals at CDH are amazing people, and they worked so quickly to get Megan’s next set of scans scheduled as soon as possible.  Megan had scans two months ago, and they showed nothing in these two spots where the two new tumors showed up, so Dr. Hayani was concerned that these tumors were growing so rapidly.  As a result, they wanted to move very quickly to get a full set of scans completed and develop a treatment plan.  Thanks to Nurse Jenny at the CDH Clinic, we were able to get Megan scheduled for her full body PET scan and chest/neck CT on Friday.  Here is a picture of Megan getting ready for her PET scan at the Cancer Center in Warrenville. 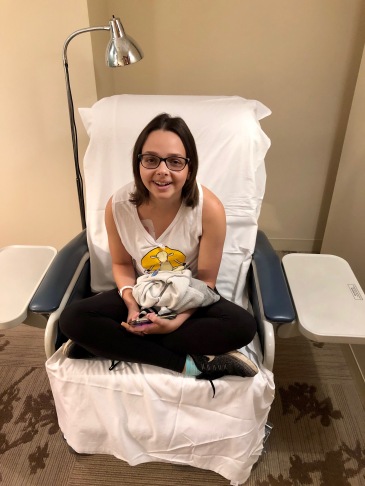 On Monday morning, she will get a brain and neck MRI, which due to her claustrophobia issues means she will need to go under anesthesia for this hour long scan.  After that, we will know if her 4th relapse is isolated or more widespread.  Obviously, we have our fingers crossed that this relapse is once again isolated and treatable.

On Friday afternoon, Dr Hayani called me again with the results of her chest and neck CT, which were not the results we were hoping for.  He said the CT verified the two tumors in her neck, but it also showed two smaller suspicious masses in her back very near her spine.  He said they won’t know anything for certain until the PET scan comes back on Monday, but given her history, we have to assume that these two spots are also a recurrence of her cancer.  Given that she has multiple potentially cancerous tumors, treating them with just proton radiation is not a practical solution.  Instead, radiation will have to be combined with some other treatment.  Therein lies the problem.

Megan continues to advocate for a change because there are such limited treatment options for childhood cancer due to a lack of Federal and private funding.  The large pharmaceutical companies don’t see childhood cancer as a profitable venture, so they don’t invest money in researching treatments like they do for other types of adult cancers.  Also, the Federal government only allocates about 4% of their total cancer research budget on specific research geared towards pediatric cancers.  As a result, Megan exhausted her clinically proven treatment options after her first relapse. Luckily, her previous relapses have been isolated to a single spot that could be treated with proton radiation.  This time, given that there are multiple potential locations, she will need more than proton radiation.  Dr. Hayani discussed her case with Dr. Walterhouse at Luries, and they have decided to try another chemotherapy combination that although is not clinically proven successful with late term relapsed ARMS, has been successful with certain adolescent patients with the disease. The treatment is called TAG and consists of three different chemotherapy drugs:  Docetaxol, Bevacizumab, and Gemcitabine.  Of course, the decision to once again undergo chemotherapy was up to Megan.

When I told Megan the recommendation from her medical team was a combination of proton radiation and this new chemotherapy protocol, I wasn’t sure how she would respond.  Here’s the harsh truth…chemotherapy is torture.  Unless you have seen first hand the physical toll it takes on a child, you could never truly understand it.  As Megan likes to remind people, childhood cancer is definitely not the smiling bald kids you see on the television ads.  The truth is that it’s a brutal process, and there comes a point where some relapsed childhood cancer patients just decide that enough is enough and to go through treatment again is just not worth it.  How sad is it that in a country as wealthy as ours, that we are okay leaving our children to make such a tragic decision?  It’s completely unacceptable!!! However, when I told Megan the recommendation, she didn’t hesitate.  Her response was, “I have to do it, because there’s no other choice and I’m not quitting.”  Given her past history of fighting off this disease, I can’t say that I was at all surprised in her determined response.

On Tuesday morning, Megan will receive her first chemotherapy treatment.  We are hopeful that she can handle the treatment outpatient and not have to stay overnight in the hospital.  However, we will have to see how she reacts to this new set of chemotherapy drugs.  On Wednesday, we then meet with her radiologist to determine the course of action for her proton radiation.  It’s going to be a very busy Monday through Wednesday for Megan, but I know she will find a way to power through it.

It’s frustrating that cancer’s grasp on Megan just will not loosen.  The moment she thinks she might be breaking free, it reaches out and grabs a hold of her again.  In fact, when cancer grabs Megan, our entire family feels the strength of its grip.  It’s been said that when a member of the family has cancer, the entire family has cancer, and after living this nightmare for the past few years, I can firmly say that is especially true when cancer hits one of your children.  We have all felt the pain and anxiety of the past few days, but of course none of us have been hit as hard as Megan.  Somehow, she always manages to keep that smile on her face and that look of determination in her eye.  It’s completely unfair, but somehow she has to find the strength to step back into the ring with cancer once again.  I keep longing for the day when cancer will finally give in and leave not just Megan alone, but every single kid fighting this ridiculous and preventable disease.  We all have to wake up and realize that childhood cancer is not rare.  It is impacting kids and their families in devastating ways every single day, and it has to be stopped!!!

We could never thank everyone on “Team Megan” enough for all of your kind thoughts and prayers for her.  It means so much to Megan and our family.

On Tuesday, the battle begins yet again. Cancer is such a formidable foe, but don’t ever bet against Megan.  Here we go…again… 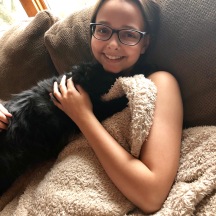