This was week three of Megan’s latest chemotherapy protocol, which means her first cycle is now complete.  During her first week of treatment, she received two different chemotherapy infusions, and she actually handled them both fairly well.  However, the two additional treatments she received in week three really knocked her down.  Her reaction was sadly reminiscent of how she reacted to her very first 54 week treatment back in 2015.  It was getting to the point where we were starting to worry whether or not she would be able to participate in her graduation celebration that we had planned for Saturday, June 22.  We had scheduled her graduation party well before she was diagnosed with her latest relapse, so instead of canceling the event, we decided to roll the dice knowing that Megan usually finds a way to make sure cancer doesn’t win.  Thankfully, this particular chemotherapy schedule gives her a break from treatment in week three to give her body time to recover.  As usual, Megan’s determination started to shine through late in the week as she really turned the corner.  By Friday, we knew that she would be full go for her celebration.

The purpose of most high school graduation celebrations are pretty simple and to the point by taking time to look back on the accomplishments of 13 years of school which culminated in graduating from high school.  However, given Megan’s history, her celebration was a little different.  Starting with her original diagnosis of Stage 4 Alveolar Rhabdomyosarcoma on December 30, 2014, Megan never was able to attend a full year of high school.  The physical demands of her original 54 weeks of treatment, and then the subsequent chemotherapy and radiation treatments from her next three relapses, caused her to have a very nontraditional high school experience.  She was unable to participate in high school activities and unfortunately, she lost touch with many of her friends and missed most of the traditional rites of passage that come with being a high school student.  Although she had quite the atypical high school experience, she has been anything but dormant and inactive during her four and half year battle.  So instead of using her graduation party to solely recognize her high school achievements, we made it a point to use this opportunity to celebrate all of the other incredible things she has accomplished during her journey.

As followers of this blog know, Megan has overcome a physical and mental battle that would have long ago caused most adults to wave the white flag in surrender.  There have been so many times in the past, and quite recently, that I marvel at how she keeps fighting so hard against this dreaded beast.  Obviously, Megan has expended tremendous effort and it would be understandable if she had become a little self-centered as she was forced to focus so hard on her personal battle.  However, Megan has done exactly the opposite as she has become a passionate and powerful voice for all kids who are fighting childhood cancer.  Her life’s goal has become two-fold:  first, she is more determined than ever to win her own fight, but second, she is determined that no more kids have to go through what she has experienced.  She wants to put an end to childhood cancer, and I know she will never stop being a motivated advocate against the disease.  Over the past four years, Megan has raised well over $200,000 to support research efforts to fight childhood cancer.  She has worked with Ivory Ella to design a line of merchandise with the goal of raising money and awareness for childhood cancer.  She has been in front of the Illinois House of Representatives to help pass a House Resolution aimed at encouraging the Federal Government to increase their current paltry investment in childhood cancer research.  She has traveled to Washington, D.C. to participate in Curefest where she was a featured speaker in front of the Capital Building.  She has met personally with all of her local Federal and State legislators to advocate for more funding to support effective childhood cancer research.  She has been the keynote speaker for the Cal’s Angels annual fundraiser and been chosen as one of the Grundy County “Women of Distinction” for her advocacy efforts.  She has also connected with kids from all of the world who look to her for support and guidance as they fight their own battles with this awful disease.  These are just a few of the many accomplishments we tried to highlight and celebrate at Megan’s graduation party on Saturday.  As someone wrote on a card to her,

“Megan, you are an advocate for some, but an inspiration to many.”

We had the perfect day, and although I wasn’t able to capture everything, hopefully these few pictures will give you some idea of how special this day was to Megan and our family.

These are a few of Megan’s friends who stopped by to see her.  Megan was excited to see all of them. 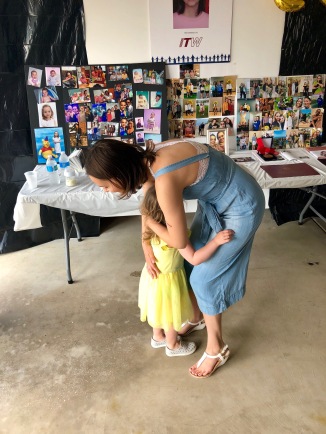 Readers of this blog may remember little Ellie.  When Megan was receiving her treatments, Ellie was sadly diagnosed with ARMS a little after Megan’s initial diagnosis.  Since Ellie and Megan both received treatment at CDH, they connected early and have stayed in touch ever since.  During overnight stays at the hospital, Megan would go visit with Ellie and her mom Tara, and the girls just developed a special bond.  Megan was thrilled when Ellie and her family all made the trip down from Wheaton to come to her party.  We all love little Ellie and we are so happy that she is in remission!!! 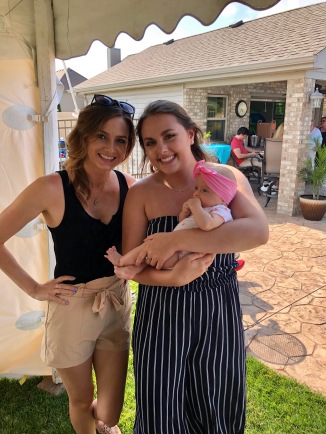 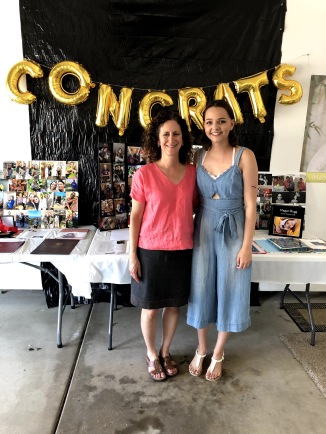 Megan was so happy that Aunt Janet and Cousin Carly traveled in from Connecticut for her party and to stay with us for a few days.

We are so thankful to everyone who came over to support Megan’s accomplishments.  I wish I could have taken pictures and talked to everyone, but I know I missed some good friends and supporters.  Please know how grateful Megan and our family is for your constant love and support.  During the toughest of times, Team Megan has always come through as a source of inspiration for Megan, and we are forever in your debt.

Saturday was so much fun, but Sunday was a bit of a downer as Kenzi had to head back to Madison.  She works with a private speech pathologist, and one of the requirements for getting the job was that she would have to work over the summer.  Since the clinic opens back up on Monday, Kenzi had to go back today.  She is also working in the lab for one of her speech pathology professors, and that starts this coming week as well.  While working two jobs, she will also be taking a summer school course, but being busy is par for the course when it comes to Kenzi.  It was so good to have her home for a few weeks, but we also know that going back to Madison is what she has to do right now.  Throughout Megan’s Journey, Megan, Deb and I have been adamant that Kenzi continue living her life as much as possible.  When Megan relapsed, it was hard for Kenzi to leave, but through the magic of social media, Facetime and cell phones, the girls will stay closely connected until Kenzi comes back for a couple weeks in August.  Of course, I know we will all find time to get together more than once over the next six weeks.  We are so proud of Kenzi, and although we will miss her terribly, we are excited for her to continue on her own journey.  It was really nice that Deb, Aunt Janet and Cousin Carly headed back with her today to help her move in.  Kenzi was excited to show Janet and Carly the sites of the University of Wisconsin.  Here is a picture of the girls saying goodbye before Kenzi headed back to Madison.

Megan has spent today recovering from her busy Saturday and getting rested up for the continuation of daily proton radiation starting on Monday and her next chemotherapy treatment on Tuesday.  Let’s hope the side effects don’t cause her too much discomfort over the next two weeks.  It’s back to reality as the fight continues on Monday…

23 thoughts on “Achievements Worth Celebrating”