In previous posts, I have compared Megan’s Journey with cancer to riding the biggest, baddest roller coaster you have ever experienced.  Over the past nearly five years, there have definitely been times when we wondered not only how we would get through the day, but how we would even make it through the next hour.  Seeing your child suffer is the worst kind of pain for a parent, but I’m sure it pales in comparison to the actual physical and mental suffering Megan has experienced at the evil hands of childhood cancer.  On the flip side, Megan and our family have also encountered tremendous highs.  I can’t explain the feeling of euphoria that came over us in February, 2016 when we learned that Megan was officially in remission.  Throughout this journey, Megan and our family have experienced the very best that humanity has to offer.  The kindness, caring and generosity of everyone on Team Megan has been humbling to say the least.  Going through this battle with Megan has restored my faith in humanity and the inherent goodness that lies within people.  As you travel this arduous road, one of the lessons you learn is to not let yourself ever get to high or too low, because just like that big bad roller coaster, you just never know what is waiting over the next climb.  This week proved to be the perfect example of what I’m talking about.

This past week was a huge one for Megan as she had a CT scan on Monday and her MRI under anesthesia on Tuesday.  As usual, Megan handled her scans like a superstar.  She has been through this so many times that everyone at CDH seems to know her and they treat her so well.  She has an anesthesiologist that she really likes, and he always makes sure he is working when he sees Megan’s name on the schedule.  Although she got through the MRI with no problem, after the mental and physical stress of going through scans, Megan is always pretty exhausted on the ride home.

Megan always struggles to recover from week two of her three week chemotherapy cycles, and this one was no exception.  Although she started feeling a little better last Sunday, early in the week she was still having some stomach issues and feeling exhausted.  At her CT scan on Monday, her blood counts showed that her platelets were low, but her hemoglobin and white blood cell counts were hanging in there.  Her oncologists asked to see her Thursday when they would check her blood again and we would go over the scan results.  In the meantime, Megan continued to try and use her week off to physically recover and get ready for the first treatment of week three, which will take place this Tuesday.

Waiting for scan results is the absolute worst.  When we met with one of her oncologists on Thursday, he shared good news with us.  Megan’s tumors are responding to these experimental chemotherapy treatments as the CT showed that the tumors in her chest have shrunk considerably and the major tumor in her neck is also much smaller.  The only tumor not responding is the one at the base of her skull, so they are deciding whether or not to go after that one with a procedure called gamma knife radiation.  Obviously, we were very pleased to learn that the chemotherapy and proton radiation are working.  The plan is now for her to go through two more cycles (6 weeks) and then go through a full set of scans again, including a PET scan.  At that point, we will determine the next course of action.  Unlike her first two chemotherapy protocols, which were clinically proven and had a set length of treatment, this current experimental treatment really doesn’t have a defined end date, so her doctors will be using her scan results in combination with how Megan’s body is holding up to determine the length of treatment.  It’s a little unsettling to know there is no definite ending date for the chemotherapy, but to know that it is working was definitely a relief.  Of course, Megan never doubted that her body would respond, because she just never loses faith in herself.  Her mental strength is amazing.

Megan’s proton radiation treatments are starting to take a toll on her skin as she is becoming more and more uncomfortable with each treatment.  Luckily, this will be her final week of treatment and her skin can start to recover, but here is a picture of what her skin looks like to date as a result of the proton beam. 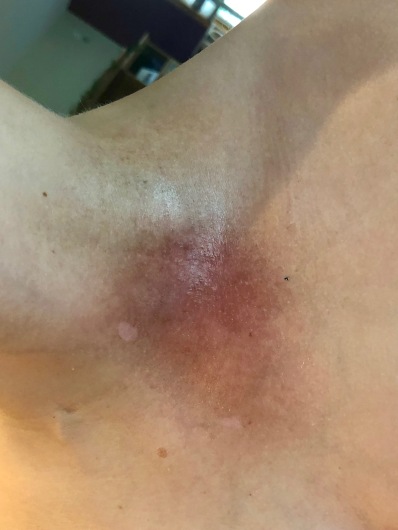 Also, because her platelet count was low, they had trouble with her port during the scans.  When they accessed and de-accessed her port, she was bleeding much more than normal, which caused the location of her port to become severely irritated.  When she went to the CDH clinic on Thursday, Nurse Jenny had to access her with an extra long needle, which Megan was not too happy about 🙂  Of course, Nurse Jenny pulled it off without a hitch.  She is the best!!! 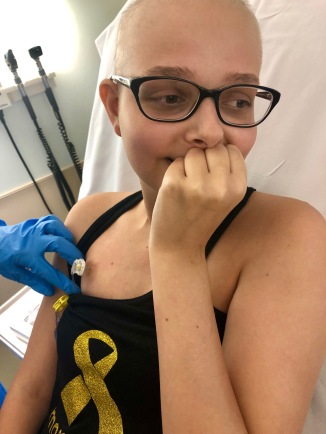 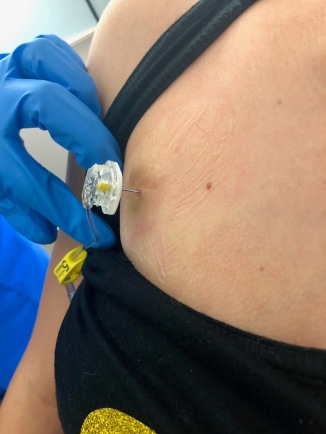 Remember that big bad roller coaster I was telling you about?  After we got the good news from Megan’s oncologist on Thursday, I had to head back to Coal City for an appointment while Deb drove Megan to her proton radiation appointment.  For the past few days, Megan has really been having trouble with severe heartburn which tends to radiate throughout her chest and to her back.  Also, one of the side effects of chemotherapy is damage to the heart, so Megan has been seeing a cardiologist and is on medication for some weakening of her heart.  The cause of the heartburn is the proton radiation beam that is clipping her esophagus.  In order to get the entire tumor in her neck, there was no way for them to get to it without clipping a bit of her esophagus in the process.  The cumulative effect of all of the radiation treatments has caused some damage to the area, which is resulting in her heartburn problems.  Sometimes it gets to the point where she can’t even eat.  While she and Deb were meeting with the radiologist, Megan started getting pain her back and chest that got so severe that it had her in tears…and when she is in tears, you know she is hurting.  Over the past five years she has developed a pain tolerance that would put most adults to shame.  The radiologist said that although he believed it was all due to the heartburn issue, her symptoms of pain in her chest and back along with an elevated heart rate were all classic signs of a heart issue.  He recommended that if it got any worse, we would need to go to the emergency room.  After some consideration, Megan decided that just to be sure it would be best to get it checked out, so when I got home, I got a phone call from Deb that they were going to the emergency room.  Just like that big bad roller coaster, things quickly went from happiness to concern as I turned around and headed back to CDH.

While in the emergency room, Megan went through an EKG, heart x-ray and a CT scan.  After checking everything out, the doctors were convinced that her pain was caused by the proton radiation and it was just something she would have to deal with until her treatment was done.  Megan was extremely relieved to know that when she is getting that feeling, it is not a problem with her heart.  Although it was a very long day as we didn’t get home until about 11:00 p.m., I think it gave her some much needed piece of mind.  Here she is in the emergency room flashing that smile to let everyone know that she’s got this under control.

Kenzi was excited because Makenna Emerson was coming to spend the weekend with her.  Being three hours away while Megan is going through all of this isn’t easy on a sibling, so having Kenna there was a welcome respite for Kenzi.  While she was there, they did all the classic UW Madison things.  Here are a few pictures of their adventures. 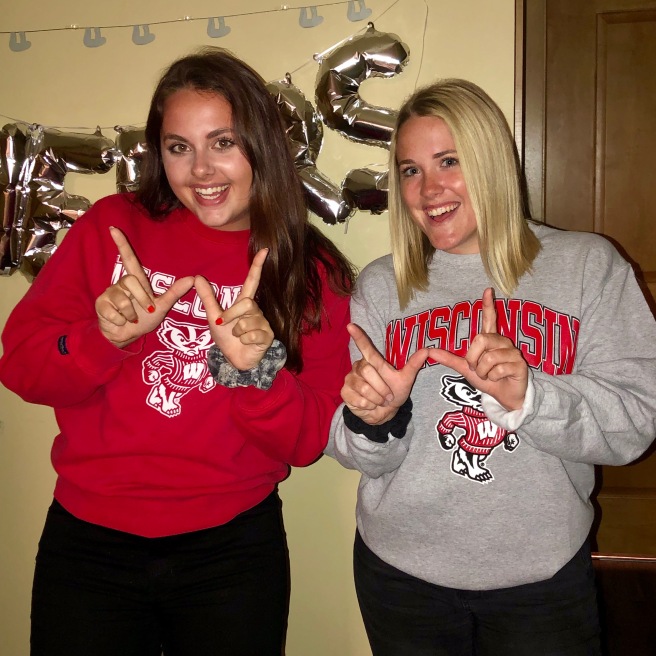 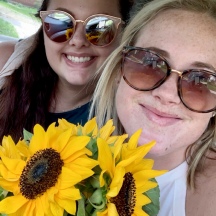 On Monday, Megan heads back to proton radiation and on Tuesday, she starts Round 3 of her chemotherapy treatments.  Although the last six weeks haven’t been easy, somehow she always manages to get off that roller coaster with that infectious smile intact.  Her positive outlook on life in the face of such challenges is something we could all learn from.  Until next week as the battle continues…