As I have reported in the previous two blog posts, Megan has been feeling better than she has in the past five years.  As her last chemo treatment gets further behind her, she continues to get stronger and stronger with each passing day.  She has even started to talk about her future, which while she was in the midst of battle, she could never get her mind to think that far ahead.  Today, she even took advantage of the sunshine and took her dog, Sparky, for a walk around the block.  To some, that may not seem like much of an accomplishment, but considering that just a couple months ago she was winded walking to the bathroom, it was a very big deal to her.  Megan has been fighting so hard to finally break free of childhood cancer’s evil grasp, but every time she gets so close, there is always a vivid reminder to let her know the disease is still hanging around.  Believe it or not, it is once again time for Megan’s three month scans, which means her “scanxiety” is ratcheting into high gear…and unless you have been there yourself, none of us can ever truly understand how she feels.

On Monday morning, Megan has to report to CDH at 8:00 a.m. for her chest CT, which will be followed up on Tuesday morning with a brain MRI under anesthesia.  Hopefully, Megan’s CT results come back by the end of the day on Monday, but we will not get her MRI results until Wednesday.  Although Megan has been through this process over and over during the past five years, it never really gets any easier.  When you have experienced the horrors of chemotherapy and its resulting devastating side effects, just the thought of going through that again can send anxiety levels through the roof.  Megan has actually gotten more adept at handling her “scanxiety”, but as any cancer survivor can tell you, it never really goes away.  Megan has learned certain tricks that help her through the day prior to her scans, such as sleeping much later than usual.  Although as her strength has improved Megan has been getting up earlier and earlier, today she forced herself to sleep until almost noon.  Her reasoning is that when she is sleeping, she doesn’t have to think about her scans.  She also tries to keep her mind occupied throughout the day.  For example, today she cleaned out her closet and cleaned her bathroom.  She also has been completing multiple word search puzzles out of a book she keeps by the couch. 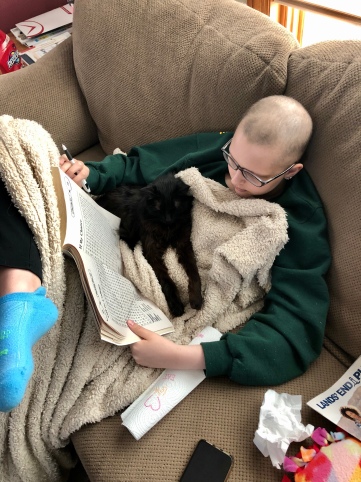 As I type this post, she is playing board games at the kitchen table with her mom, and later tonight, we plan on getting out of the house for supper.  If she does have downtime, she will review her social media pages, or if she is really struggling, her pets always come to the rescue.

It’s sad that not only Megan, but all of these brave childhood cancer fighters have to go through this agonizing phenomenon known as “scanxiety”, but until our country decides to make these kids a priority, this will sadly happen over and over and over again.  Speaking of making childhood cancer a priority, yesterday was “International Childhood Cancer Day”.  Of course, it didn’t get much attention in our country or with our politicians, because it never does.  Unfortunately, society tends to have so many other priorities, and I understand that there are a lot of bad things out there that need to be addressed.  However, I will never comprehend how childhood cancer does not advance to at least near the top of that list…especially considering the facts.

I understand that some may say that the cure for childhood cancer just isn’t out there…well I don’t believe that for a second.  Over the past six months, Megan and I have been contacting doctors all over the country to discuss the potential clinical trials they are working on.  Sadly, nearly every single doctor has the same story.  Each of them has a drug that has been highly successful with lab animals, but the drug is just sitting there because they lack the funding to take the drug to a full clinical trial.  Why?  Because most clinical trials are funded by the large pharmaceutical companies who do not view childhood cancer as a profitable venture.  So that leaves the Federal government, who instead focuses over 96% of their budget towards funding research for adult cancers and hope that maybe, by chance, something that is created to treat adults just might happen to work for children…which seldom happens.  I am firmly convinced that the answer to curing childhood cancer is sitting in a researcher’s lab right now…but since a full clinical trial costs $10 million, those solutions will continue to sit there…and more kids will continue to needlessly suffer.

Luckily, there are brave childhood cancer fighters like Megan and her peers who are advocating as hard as they can…and some people are starting to listen.  Unfortunately, our politicians continue to be tone deaf, and until they start listening, childhood cancer will claim the promising lives of 5 more kids today…5 more the day after that…and five more the day after that………  These brave kids deserve so much better.

Megan’s Journey has taught us the importance of taking advantage of opportunities when they come up instead of putting them off until some other time.  We took advantage of that philosophy this weekend and found a way to get family together for lunch on Saturday.  Kenzi made it down from college and we were joined by her boyfriend Nick, Uncle Todd and Gina, and Grandpa and Grandma Bugg.  It was so good to see everyone! 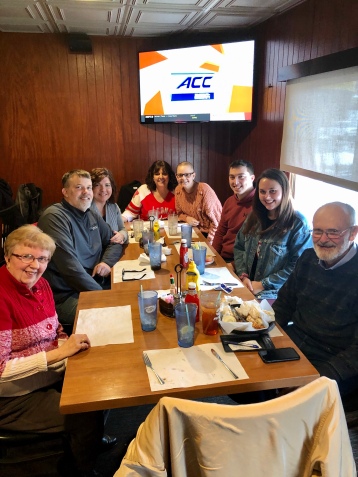 Since we knew Kenzi was going to meet us, we actually met with her prior to lunch so the girls could exchange their Valentine’s gifts for each other.  It was great to catch up with all of the great things Kenzi continues to accomplish at UW-Madison.  We continue to be so proud of her!!! 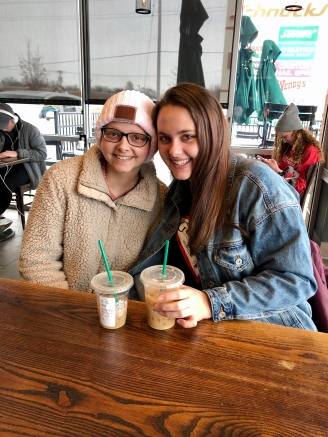 This past week, Megan received a visit from one of Kenzi’s good high school friends, Cali Caruso.  She is part of the Western Illinois University Chapter of “Love Your Melon”.  She brought Megan the sweetest care package complete with handmade cards from the WIU chapter members.  That visit really brought a smile to Megan’s face. 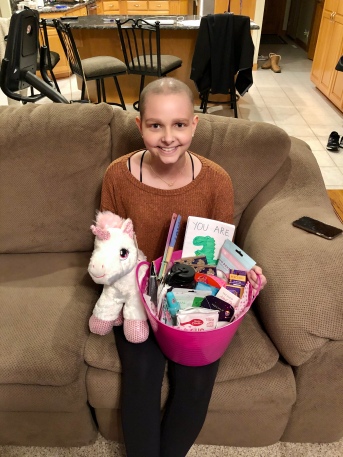 It’s scan week.  Megan could really use everyone on “Team Megan” to send her positive thoughts at 8:00 a.m. on Monday and on Tuesday morning as she completes her scans.  We will continue to follow Megan’s lead and think positive.  Although Megan is nervous, she is doing her best to put on a brave face and continue to think positive.  Today, when I was asking how she was doing, she stated that she was nervous, but was continuing to believe in herself.  She said,

“If you don’t believe there is a light at the end of the tunnel, then you will never find it.”

She pretty much summed up “Megan’s Journey”.  Let’s hope for good news this week.

40 thoughts on “It’s Time for Scans…Again”